Hi! I have been a little scattered and working on a few things at once and so most of those things are not done done, just almost done. So, I am going to share the three little things I have updated in the living room in my continuing quest to brighten it up.

The very first thing I did was take a picture to determine exactly which dark things were bugging me. I think it tends to be easier to tell in a picture, but I am not sure why. This is what I was working with. The other side of the room is a bit better, but today I am focusing on the side that needs most help. Incidentally, it is basically impossible to take a good picture of this room. 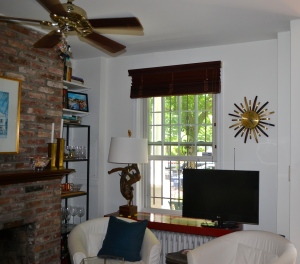 A few things really jump out. First, there is just way too much stuff, but that’s not a problem I want to work on until the other shelves in the study are done. Second, the brown blinds practically punch me in the face, and the dark fan makes the ceiling, which is not low, feel like it is resting on my head. Also, the fireplace just looks so, so messy. Those are things I could fix. I found that clock broken, requiring an outlet, and looking super dingy at Miss Pixie’s and fixed it up, and my mom made the driftwood sculpture in college and then my dad and I turned it into a lamp last year, so even though they are dark, they are definitely staying.

My plan was to paint the fan blades white. At some point I would love to have a room where the sort of British Colonial woven ceiling fans work, but that is not this room at this point. Did you know that most ceiling fans blades have ANOTHER COLOR ON THE BACK?? Stop laughing, adult family members of mine, not all of us knew this. I was all ready to paint, but when I climbed up the ladder to get the blades down, I was greeted with the delightful surprise of MUCH lighter veneer on the other side of the blades. Yahoo! 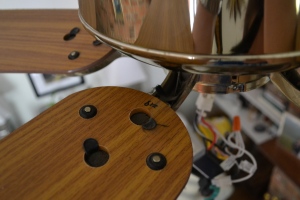 Changing them is really simple.  The little wing-nut-esque guy is really a sort of switch that slides the bent pieces of metal out of the way and allows you to lift the fan off of the two rivets. In the end, it took about 3 minutes to flip them over and be done. Ignore the exposed cords. I keep trying to tape them up “for now” and they fall down, so I gave up. There was a light fixture there when we moved in that was the first thing to go when we moved in and then someone who will remain nameless has not quite finished the job. But the wires are better than the light fixture, so there’s that. 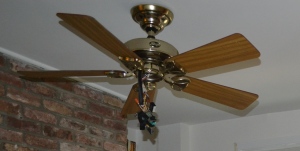 I think having the light wood there will be good in the end. I don’t want to go too far accidentally paint myself into a white box in there.

Moving on to those blinds. I just took the whole thing off. It was remarkably simple and only required a screwdriver. We are going to need a curtain there at some point but that one change made the biggest difference of all. 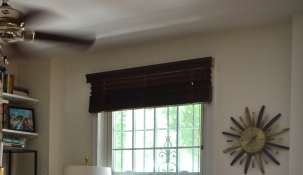 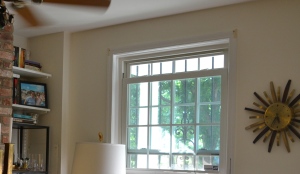 The last bit is going to sound a little counterintuitive, but it was a great step. I painted the firebox matte black. DO NOT USE REGULAR PAINT FOR THIS. I ordered Rutland 1200° Brush-on Flat Stove Paint from Amazon because it was the only one I could find that specifically mentioned being ok to use IN the fireplace. Rustoleum has a high-heat paint that I have seen around a lot, but the guy at Frager’s said not to use it and since we actually use the fireplace a lot in the winter, I went with his advice.

The application isn’t hard, just EXTREMELY fumey. I vacuumed out the fireplace and then brushed it on straight from the can. And almost passed out. When they say well-ventilated, they MEAN well-ventilated. If I owned a respirator, this would have been the time to use it. But, it made a huge difference and all it cost me was paint and a few brain cells. It just looks so much neater. 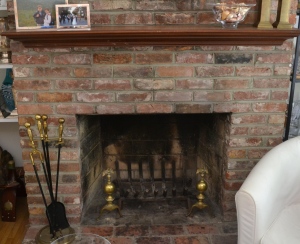 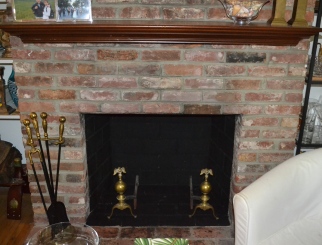 There is obviously plenty left to do in there – a larger piece of art over the mantlepiece, paint the red console table another color, get curtains – the list goes on. But I think chipping away at some of the smaller stuff in the meantime is making a difference and I am really excited. So, a not-so-memorable before and after. 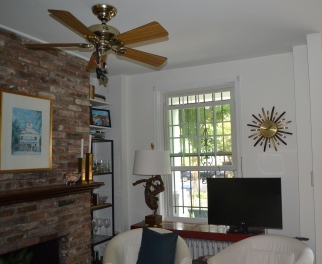