It’s almost the 4th of July!  I love the 4th because it means the summer is about to really hit its stride. This year, before we head to HP, I wanted to have a little pre-fourth cookout with our friends in DC. I decided that a festive tablecloth would be a fun project without going overboard.  It was a pretty easy and inexpensive project that can be changed for any party. 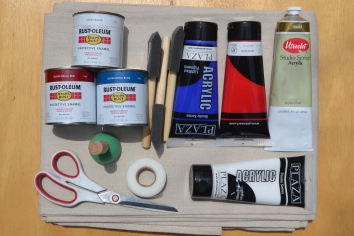 First, measure the table and cut the drop cloth down to fit.  I got a drop cloth specifically to be the right width for the table so that I only had to hem one side.  Make sure the line is generally straight across, but don’t go nuts making the cut perfect since you will be hemming it. Next, hem the cut side.  If I had a sewing machine, I would have used that, but stitch witch is a pretty great substitute.  First, fold the side to be hemmed over and iron flat.  Then lay a strip of stitch witch under the flap – see top left picture.  At this point, if you are not me, your iron won’t start randomly turning off and on and the rest of the ironing parts will be a breeze.  If you are me, this simple project will turn into one which requires the patience of a nun.  Which I definitely DO NOT HAVE.  Anyway.  Using the hottest setting on your iron, slowly run the iron over the flap until the tape melts and fuses the sides together.

Then snip the very ends at an angle and fold the newly-hemmed part over and repeat the preceding steps to get a nice neat hem.  It will take a lot longer for the tape to melt on the second pass because there are more layers to get through, but it will melt, don’t give up. 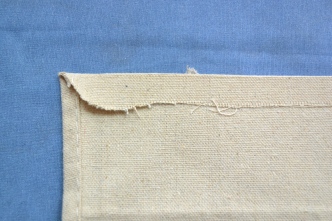 Let the hem cool for 10 minutes and then put the drop cloth through the washer and dryer to soften it up. You can skip this step, but the resulting tablecloth with be much stiffer and won’t drape over the table as well.  Once it is dry, iron it (the damn iron again…).  At that point I folded it in half the long way and made a small crease to mark the middle.  I ran a pencil over it so that it would be easy to find later. Now for the fun part.  Lay the drop cloth out with newspaper or plastic sheeting under it on something large and flat.  The ground would be ideal if you don’t have a handy-dandy huge piece of plywood like we do.  Full disclosure – it is for drinking games. Not an adult.

Once your drop cloth is all ready, use painters tape to block off stripes starting from the middle and moving out to the sides. I sketched mine out on paper in advance. I used the yardstick to make sure that the wide stripe in the middle was actually centered around the middle, but after that I just eyeballed the widths of the strips. I pressed that tape down as best I could. In the end it didn’t prevent all bleeding, but I like how it looks slightly freehand. At least for me, actual freehand would have been a wobbly mess.

Once you like the look of the stripes, paint in the blank spaces. The cloth absorbs a lot of paint, so it is more dabbing than painting. I ended up sticking with the Rustoleum paint and only used the gold acrylic paint for the stars which I added once everything was dry.  While the paint was drying, I cut a star shape out of some cardboard (a frozen pizza box). Once it was ready, I used a foam pouncer and some gold paint to add stars down the middle. Pull off the tape and let dry.

So there you have it. An easy party project that you can use whenever you need an inexpensive update to impress your friends. Now, like a blog party favor, I leave you with a close-up of my most recent and one of my most fabulous ($5) flea market finds. Thank you Eastern Market for my new brass lobster buddy. May I never again misplace the spare keys. 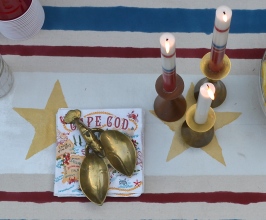 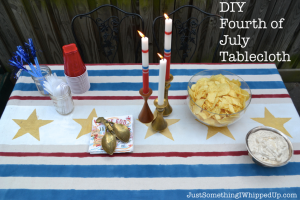